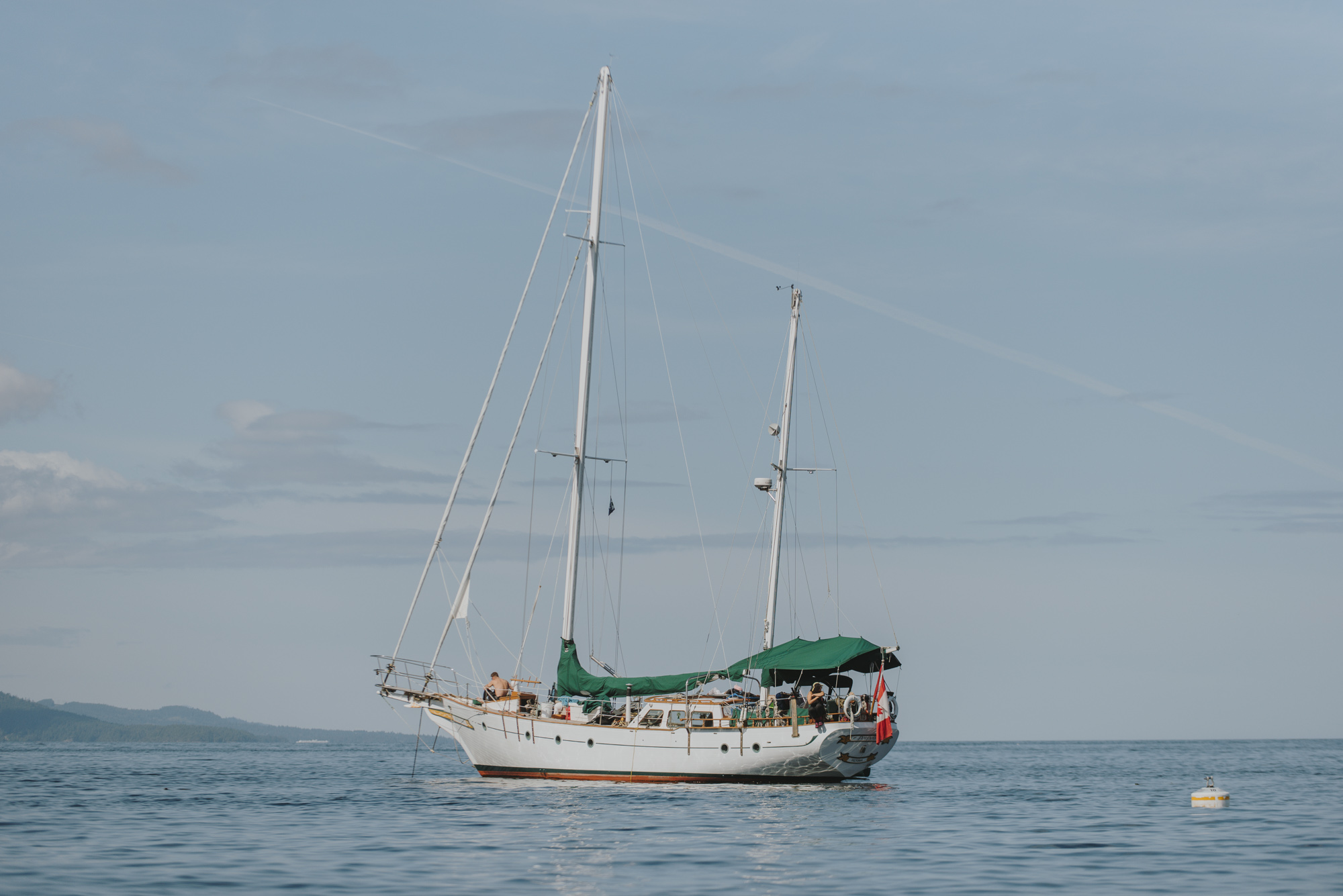 Event Recap from our 2021 Sailing Trip.

It’s dark out. The table in the boat cabin has been cleared from the chicken curry (where the chicken was falling off the bone mind you), rice and salad we had for dinner and the warmth of the dim lights colours the space. Two of us are sitting in the corner of the table. Maha starts playing “Killing Me Softly” by The Fugees for us to sing along with, an impromptu karaoke. She sings through the verses and I mostly join in for the chorus. Lydia and Gigi are drying the dishes.

When we first anchored, we went onto Cabbage Island, one of many that make up the Gulf Islands, which is a part of the traditional unceded territory of the W̱SÁNEĆ First Nations, to explore camping spots for those who were going to sleep there overnight. After puttering around for what may have been two or three hours, we all steadily made our way back to the ship, Porpoise, by various means of kayak and speed boat. Having been a part of the first group that left the island in Captain John’s speed boat, we neared the Porpoise, and we were greeted by the smell of curry spices and warmth. Each person that came aboard exclaimed the same thing – “Oooh, that smells so good.” Dinner was ready.

Our cook on this sailing trip was Gigi Clarke, and I would describe her as a culinary connaisseur. Gigi loves to cook and she describes how she makes food as intuitive. Being in the kitchen has been a happy place for her since she was four, and her daughter, Marieani, who’s two, also loves helping out. Being greeted by a meal that’s made from a space of love and the utmost joy of cooking feels like a loving embrace, and this trip was full of that. The food was like an extension of Gigi’s personality. Welcoming and full of the best surprises. Also our mantra as the Colour the Trails crew consistently became, “What’s next?” for dinner or breakfast.

The kitchen – or galley as I learnt by perusing the Pacific Encounter’s website to figure out the right terminology for ship related words – was a central spot for us to gather when it was grey outside on our first day and the table was consistently laid out with food. There were not enough gaps in time to even begin to feel hungry. And even on our second day when the weather improved, the kitchen table was still a gathering place. Kitchen spaces are definitive hubs of coming together. Something about the communion of sitting and eating together centralises the space as a one of joining.

This was my first sailing trip and for some of the other CTT crew too. For others, this was their second and they described the ship as a second home. Thank-you to Captain John and Gigi for welcoming us onto the Porpoise, and thank-you to Colour the Trails for facilitating the space and partnerships for moments and days like this to occur. We look forward to more sailing adventures!